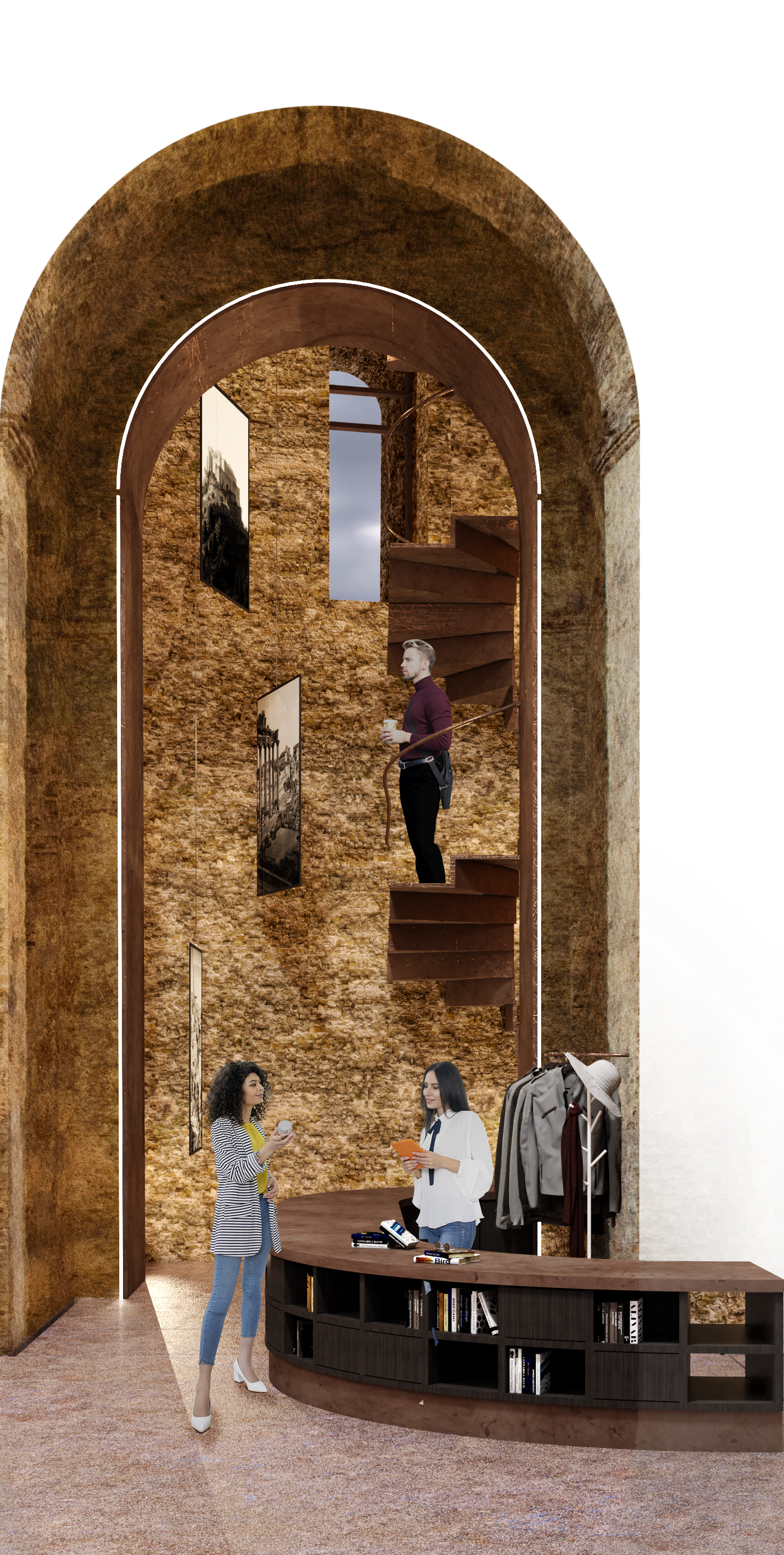 With the reuse of the fallen church, not only a great landmark is being reactivated, but also the public spaces around it are being rehabilitated. In the map we can locate the different scales of such spaces ranging from central squares with characteristics of landmarks, public spaces in widened intersections to semi-private yards and unbuilt plots. To that network, by projecting the future of the settlement as shown in the general map, we can see the complete extent of these public spaces after the demolitions that are programmed.

A space to be expanded, is the one on the south side of the church, which according to the general map is being widened from a narrow street to a square. In the network of open spaces, it will be an intermediate space between big central squares and semi-private yards. Therefore, it will be transformed to a living space, between public and private.

In order to connect with such a space and use it as an entrance we pierce the church’s chapels revealing the arches of the inside to the monument’s facade and filling the space with light. Except from the functional use, we symbolically propose that the chapels, traditionally dedicated to a few people of wealth, are offered for public use.

Regarding the organization of the concert hall’s plan, the dynamic of the original use of the monument constrainsus to preserve the central axis for the new functions. The main entrance to the building remains from the East side of the monument leading to a large foyer. This open plan space, also, hosts the box office, the gift shop, the bar and the staircase that lead to the upper gallery. The north tower, communicating with the foyer after the creation of the chapel arch on the back wall, is used as a vertical exhibition climbing to a small open-air observatory.

A large curtain separates the foyer from the concert hall allowing the unification of the entire plan. Under the fallen dome of the church the stage is placed as the most central part of the new function. The audience is located on the three sides of the stage completing the cross-shaped typology of the original use, creating seating space to host approximately 130 visitors.

In the new function given, the performer takes the role of the priest. Therefore, the backstage is placed at the altar and can be isolated by theatre curtains. The double height in the section of the altar allows us to design a stage elevator that communicates with the lower street level, accessible by car, and thus supply the stage with the heavy instruments, theatrical sets and props needed. At the same level, the administration office, storage and hygiene spaces are located. We also design a secondary wheelchair accessible entrance for the audience.

We choose to exclude the north part of the building from the main functions that require closed spaces, keeping only the cross-shaped plan, typical of the renaissance churches. Instead, as a patio, it will be incorporated in the previously mentioned network of open spaces. With the immediate communication to the bar it can become a vivid scenic space for the people of Grottole.

Regarding the roof of the main space, references of the monument’s typology are being embodied. A crucial turn towards renaissance was the reinvention of the roman barrel dome, showing a new era of material wealth and glory after the spiritual medieval times. In a similar mind we try to translate the dome through minimalism and morphological freedom of contemporary architecture. Two hemispheric domes are placed at the central nave where the ceiling has collapsed. One above the audience, expanding the space and punctuating the symmetry of the original design. One above the staircase symbolizing the ascent, but this time playful, off-axis and tilted in its section. The rest consist of a metal-glass structure, connecting the domes to the stone walls, allowing both a luminous space during the day and a view of the night sky during the night.

As all the above are achieved with movable partitions, a large series of functions and layouts are possible.